Sardinia in a nutshell 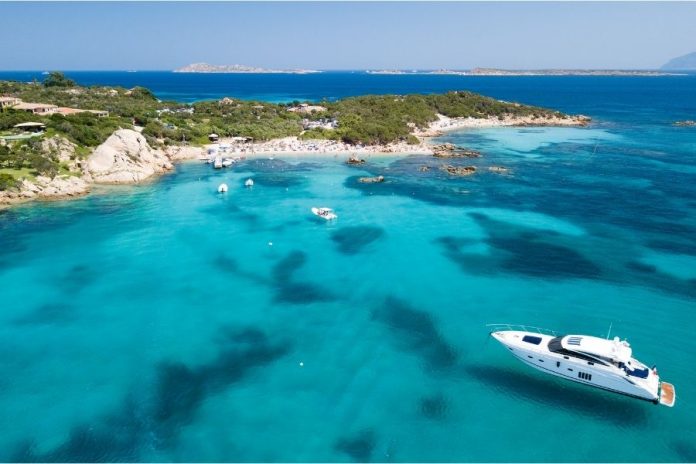 Sardinia is the second largest island in the Mediterranean Sea, after Sicily, located in the center of the western Mediterranean.

Rich in mountains, woods, plains, largely uninhabited territories, streams, rocky coasts and long sandy beaches, the island has been defined as a micro-continent due to the variety of its ecosystems.

The Sardinia Channel divides the Sardinian coasts from the Tunisian coasts of the African continent which are located 178 km further south (Capo Spartivento – Cap Serrat), while the Strait of Bonifacio separate it to the north from Corsica (11km).

The territory is mostly mountainous.The highest peaks are the Gennargentu massif, the Limbara, the Alà mountains and the Supramonte di Oliena.
The largest plain is the Campidano, which separates the central-northern reliefs from the Iglesiente mountains, while the Nurra plain is located in the north-western part of the island.

The coasts are divided into the gulfs of Asinara to the north, Orosei to the east, Cagliari to the south and Alghero and Oristano to the west. They are rocky in the north, while low and sandy coasts are found in the south-west.

The Mediterranean climate is typical of much of Sardinia. Along the coastal areas, where most of the population resides, thanks to the presence of the sea there are mild winters with temperatures that rarely drop below zero.

On the mountain massifs in the winter months it snows frequently and temperatures drop below zero, while in the summer the climate remains cool, especially during the night, and it rarely gets hot for many consecutive days.

Sardinia is also a very windy region; the dominant winds are the Mistral and the Ponente.

“Life in Sardinia is perhaps the best that a man can hope for: twenty-four thousand kilometers of forests, countryside, coasts immersed in a miraculous sea should coincide with what I would advise the good Lord to give us as Paradise” (Fabrizio de Andrè )

A unique, distant island, for centuries and centuries “on the edge” of the history and trade of the Mediterranean.
The sea of Sardinia, limpid and very clean, inhabited by many fish and cetaceans, such as dolphins and the very rare monk seal, has amazing depths.

The coast satisfies all tastes: from fine white beaches, to golden sands on which lilies and cistus grow, to small hidden streets, up to sheer cliffs; from the Costa Smeralda, to the coast south of Olbia up to Villasimius, and then to the wild coasts of the eastern and southwestern coasts.

Among the numerous islands, the Maddalena Archipelago stands out, with its seven “sister” islands and the island of Caprera, where Garibaldi landed.

Mountain lovers can go to the discovery of the Gennargentu region, the largest mountain complex in the region, Sardinia is also the history of ancient civilizations: the most famous, although still mysterious, is that of the “shepherd kings”, who left to posterity the “nuraghi”, ancient cone-shaped defensive towers, the largest and best preserved megaliths of Europe.

In the Sulcis Iglesiente there are instead the tombs of the giants or the “domus de janas” (houses of the witches), ancient tombs carved into the rock. On the other hand, Tharros, an archaeological site near Oristano, dates back to Roman times, with a terrace overlooking the sea.

The capital Cagliari, a city of a thousand faces, as well as being famous for the colonies of flamingos in the lagoon, is home to traditional festivals and fairs throughout the year.

The main one is the feast of S. Efisio, which combines religious tradition and folklore. But many other cities and small villages are waiting to be discovered by visitors, to get closer to a culture that has remained intact over the centuries and cannot be found elsewhere.

Sardinian cuisine is varied, characterized by its insularity and agro-pastoral culture, enriched in history through contributions and contaminations from contacts and exchanges between different Mediterranean cultures.
Varied and diversified, it ranges from roasted meats, bread, cheeses, wines. The basis of Sardinian cuisine is wheat, the basis of many typical products and dishes: Carasau bread, malloreddus and fregola.
The Sardinian durum wheat semolina produces a high quality type of pasta that lends itself to being processed in the most varied forms.
In the typical cuisine of Oristano and in the ponds of Cabras, but also in Bosa, eels are also present.

The ponds are rich in fish and from the eggs of these the mullet bottarga is produced which can be eaten in thin strips seasoned with oil, as well as grated on pasta.

Some of the typical first courses are: Malloreddus (durum wheat semolina dumplings traditionally flavored with saffron. Usually they are seasoned in the Campidanese style, ie with sausage sauce); Culurgiones (small dumplings filled with ricotta and mint, or with a filling based on potatoes, fresh cheese and mint); the Fregula (a particular dry pasta of durum wheat semolina, processed in small lumps and used for typical dishes such as fregula with clams or fregula with sauce); the Gallura soup (consisting of Sardinian bread, cheese, spices and pecorino, all softened with broth and cooked in the oven).

The second courses are often made with meat. The most typical and famous dish is the “porcheddu”, the suckling pig weighing about 4 – 5 kg or twenty days old, slowly cooked on a spit, on grills and flavored after cooking with myrtle or rosemary.

Finally, among the unique products of the island there are Pecorino Sardo (DOP product of a very long historical and cultural tradition), bottarga (salted and dried tuna or mullet eggs, similar to drusso caviar), tuna from Carloforte and the Alghero lobster, which is prepared “alla Catalana”, that is boiled with tomatoes, celery and onion and accompanied with a sauce obtained from the head with the addition of lemon juice, olive oil, salt and pepper.
Finally, Sardinia produces excellent wines, such as Vermentino di Gallura, Cannonau, Carignano, Vernaccia di Oristano and Moscato di Sardegna, and the famous liqueur, Mirto.