8 Train Stations in India with the Most Interesting Backstories 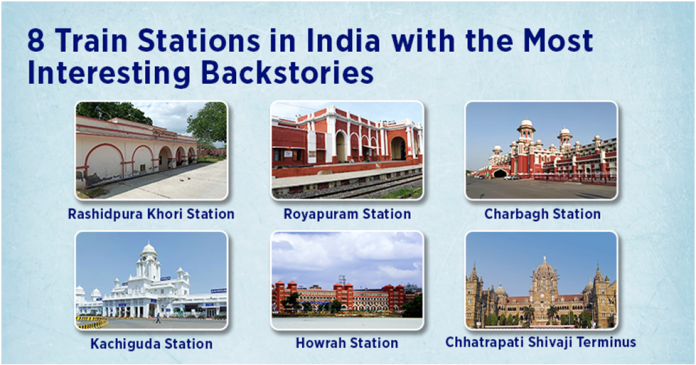 Train stations are interesting places to visit. Perhaps it is because they have survived wars and extensive urbanisation. Maybe, their antique architecture drives authors to spin tales around them. It could also be attributed to the train trip, a thrilling journey to a remote location, or a trip back to a place you are fully acquainted with.

Regardless, train stations are more than transport centres; they are portals that transport you to another realm altogether. Going to a train station in India can be like going back in time because of the architecture and interesting history.

So whenever you plan your visit to such stations, spend some time at the station to experience its intriguing story. You can use the rail app to plan a train trip to these railway stations. You can even take a journey break at these stations to witness thrilling tales.

Many out of India’s 7,325 railway stations are noted for their aesthetic architecture and scenic settings. On the other hand, some train stations are known for their long platforms. There are also a few, popular for their intriguing tales. Here are 8 Indian train stations that have remarkable stories to tell.

RashidpuraKhori is a peculiar, small rural junction on the narrow gauge of North Western Railway’s Sikar-Laxmangarh. The people in the village run and take care of this distinct train station. The station was shut down in 2005 by the Jaipur division of the Indian Railways’ North-Western zone due to a lack of revenue. Around 20,000 residents of RashidpuraKhori and several surrounding villages wrote to the railway officials, as they were likely to be impacted by this. However, it didn’t help at all.

In 2009, the railways said they would reopen the station if they could sell three lakhs of tickets. People in the village got together to raise money for the station’s restoration. In 2009, locals turned it on, and since then, it has been run by people from the village. They have been sharing the responsibility for its cleanliness and maintenance. The person in charge of ticket sales earns 15% of whatever sale is made by them. Moreover, people are also appointed to verify if anyone is travelling without a ticket.

The Royapuram station, a simple red-and-white colonial building with large Corinthian columns, is likely the oldest station still standing in the entire subcontinent as the original buildings of Bombay and Thane stations no longer exist. Lord Harris, the Governor of Madras Presidency at the time, opened the Royapuram station on July 1, 1856. The initial routes covered Royapuram to Ambur and Royapuram to Tiruvallur, respectively.

Given its proximity to Fort St. George and its population of British merchants and locals, Royapuram was selected. The Madras Railway Company set up the train station. The Madras High Court ruled in 2016 that the 160-year-old heritage structure at Royapuram Railway Station could not be stretched further.

The beautiful red-and-white Charbagh Railway Station is a work of art. A glance towards it is enough to get enchanted by its appearance. Railway authorities built it in 1914 in Lucknow, the City of Nawabs. It was designed by J.H. Horniman, who used both Mughal and Rajasthani styles in its design. The beautiful building has domes, minarets, and cupolas, and it looks out over a large garden just outside its front door.

The station gives the appearance of a Rajput palace. From above, it looks like a chessboard with the pieces set up. When you stand at the train station entrance, you can’t hear the noise from the trains coming in or going out, which is strange. In 1916, Mahatma Gandhi and Jawaharlal Nehru met for the first time in person at this station. A stone with an inscription was placed in front of the train station to mark this important meeting.

The busy city that has grown up around the Kachiguda Railway Station might appear as if it doesn’t belong there, but that doesn’t change the station’s importance in terms of its architecture and history.

The station’s construction was part of the Godavari Valley Light Railway during the reign of Nizam Osman Ali Khan in 1916. State authorities established it to improve trade with western cities like Mumbai. In addition to its interesting architecture and 100-year-old wooden staircases, the Kachiguda railway station had a separate area with a wall for women, called a “purdah” that let them get on and off trains in private. People can also learn about the history of Nizam’s State Railway at the station’s railway museum.

After crossing the Hooghly river, Kolkata’s most prominent landmark, you reach the well-known Howrah station. The massive brick-red building makes this second oldest station and one of the biggest railway complexes in India truly stand out. The Howrah station turned 111 years old on December 1, 2016. On this day in 1905, the six-platform station opened for business.

It was a great feat by British engineers and a turning point in the colonial vision of growth. Today, the terminus is the main hub for all of eastern India. It has 23 platforms used daily by more than a million people.

The architectural design of the Howrah station on the banks of the Hooghly river is a fusion of Romanesque and traditional Bengali designs. It was designed by the British engineer Halsey Ricardo, and it fits in well with its surroundings. The most remarkable part of the station is the “boroghari” (big clock), a double-faced clock with heavy wooden frames put up in 1926.

The terminus set up in the 1800s was initially named the Victoria Terminus. Now a UNESCO World Heritage Site, the design of this historic terminus is a blend of Victorian Gothic Revival and conventional Indian architecture. It has turrets, spires, domes, roofs, gargoyles that shoot water, and patterns of flowers and animals on its three stories. On top of the building is an octagonal, ribbed dome that is its crowning glory.

In the past, all business and trade in Mumbai took place at the Bori Bandar station, which was in the east of the city. F. W. Stevens made it during the colonial era. He named it Victoria Terminus (VT) after Queen Victoria, who was in power then. It took ten years to finish building the building, which was longer than any other building in Bombay at the time. It was inaugurated on the Queen’s Golden Jubilee in 1887. At the time, it cost about 260,000 Sterling Pounds and was the most expensive building in Bombay. To honour the great Maratha warrior ChhatrapatiShivaji, railway officials later renamed this 19th-century work of art “ChhatrapatiShivaji Terminus”.

The Begunkodor train station was empty for forty two years because people thought it was haunted. This station in Purulia has a reputation for being haunted. The district headquarters of Purulia in western West Bengal is located around 26 miles (43 km) from the village of Begunkodor.

A railway employee is believed to have died within a few days of spotting the ghost of a woman in a white sari in 1967. After hearing the rumour, everyone who worked at the train station quit and refused to be sent to the station. The railway minister finally decided to reopen it in 2009 for the villagers.

Barog is a lovely little train station on the track between Kalka and Shimla. It has a long and interesting history. Constructed in 1903, the Barog station building has Scottish-style gabled roofs and beautiful mountain views. Local legend says that the British railway engineer who helped build this tunnel on the Kalka-Shimla railway still haunts the spot.

In 1898, Colonel Barog ordered boring operations on opposite sides of Shimla Hill, thinking it would eventually make the holes intersect. The British government gave Barog a fine of Re 1 for wasting money because he didn’t ensure the desired outcome. The colonel felt ashamed, so he shot himself inside the unfinished tunnel and was buried near it. Since then, ghost stories have always been told about the station. Later, a British engineer named H.S. Harrington and a revered person from the area named Baba Bhalku worked together to finish a new tunnel. Today, this UNESCO heritage route makes several stops at the charming station.

Whether it is the tales we believe in or the adventure we experience, we cannot deny that there is some intriguing appeal to these stations. So, which of these railway stations do you think has the most intriguing story?

If you want to discover intriguing stories and local legends about specific locations or stations across India, taking a train trip would be a great idea. Plan your future train trips using a good train app.

RailMitra boasts of an AI-driven platform dedicated to helping passengers get quick and timely updates on their train journey. It is applicable for both desktop and mobile platforms. From live train status enquiry, trains between stations to seat berth availability and more, RailMitra guarantees to take your train travel to the next level.

Moreover, with RailMitra AI-feature, you can book your rail meal in advance. You can also RailRestro, an e-catering platform to order food on train.

RailMitra wishes you an amazing train trip to India’s most interesting Railway Stations.