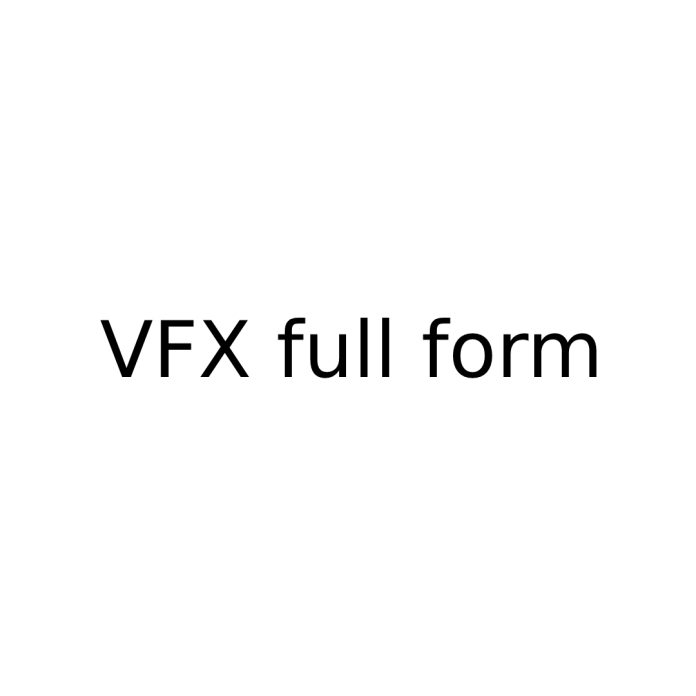 The use of VFX has become increasingly prevalent in the film industry. What started as a few simple computer effects in movies over 30 years ago has now become an integral part of producing a successful cinematic experience. VFX, or Visual Effects, are used to create stunning images and scenes that would be impossible to make with traditional filming techniques. But what exactly is VFX full form? In this ultimate guide, we will explore the world of visual effects in movies, from their application and terminology to their history and uses. Read on to learn more about the power of visual effects and how they shape our cinematic experience today.

What are Visual Effects?

Visual effects, or VFX, are the finishing touches that filmmakers add to a movie to make it look more realistic. This can involve anything from adding computer-generated special effects to creating the illusion of a huge crowd scene.

VFX artists use a variety of techniques to create their magic, including 3D animation, rotoscoping and motion capture. With the help of VFX, filmmakers can bring their vision to life and create some truly amazing cinematic experiences.

A Brief History of Visual Effects

The history of visual effects is a long and complex one, filled with ground-breaking innovations and incredible artists. Over the years, these techniques have evolved and become more sophisticated, allowing filmmakers to bring their visions to life in ever more realistic ways.

Some of the earliest examples of visual effects can be seen in Georges Melies’ short film “Le Voyage dans la Lune” from 1902. In this film, Melies used a number of innovative techniques to create his magical visuals, including hand-painting animation cels and using multiple exposures to create the illusion of characters disappearing and reappearing.

Another early innovator in the field of visual effects was Willis O’Brien, who is best known for his work on the 1925 classic “The Lost World”. O’Brien pioneered the use of stop-motion photography to bring prehistoric animals to life on screen. This technique would go on to be used in a number of other landmark films, such as 1933’s “King Kong”.

Over the years, visual effects have continued to evolve and change as new technologies are developed. In recent years, computer-generated imagery (CGI) has become increasingly prevalent in movies. CGI allows filmmakers to create entire worlds and characters that would otherwise be impossible to realize on screen.

Some of the most

How are Visual Effects Created?

Animation is the process of creating moving images using still images or drawings. This can be done by hand or using software. CGI is the use of computers to generate images or animations. This can be used to create realistic images or impossible ones.

What are the Different Types of Visual Effects?

There are many different types of visual effects (VFX) that can be used in movies. Some of the most common VFX include:

-CGI: This stands for “computer-generated imagery” and is used to create realistic images or environments that would be otherwise impossible to film.

-2D animation: This type of visual effect is used to create two-dimensional images, such as those seen in traditional hand-drawn cartoons.

-3D animation: This type of visual effect is used to create three-dimensional images, such as those seen in modern computer-generated movies.

-Motion graphics: This type of visual effect is used to create moving graphics, such as those seen in title sequences or opening credits.

-Digital compositing: This type of visual effect is used to combine two or more images together, such as combining live-action footage with CGI.

How to Become a Visual Effects Artist

In order to become a visual effects artist, there are a few key things that you will need to do. Firstly, it is important that you have a strong passion for visual effects and filmmaking. Secondly, you will need to gain as much experience as possible in the field of visual effects. This can be done by working on personal projects, or by completing internships or work experience placements with VFX studios. Finally, it is also essential that you have strong computer skills and are proficient in the use of industry-standard software packages such as Autodesk Maya and Adobe After Effects.

VFX stands for Visual Effects, and it is a crucial part of filmmaking. From the early days of special effects to today’s cutting-edge computer animation, Visual Effects are an integral part of creating action-packed blockbusters that audiences worldwide enjoy. Learning about VFX can open up a world of possibilities for filmmakers who want to take their projects to new heights. With the right resources, techniques and knowledge on how to use them correctly, you can create truly unique visuals that will make your film stand out from the rest.